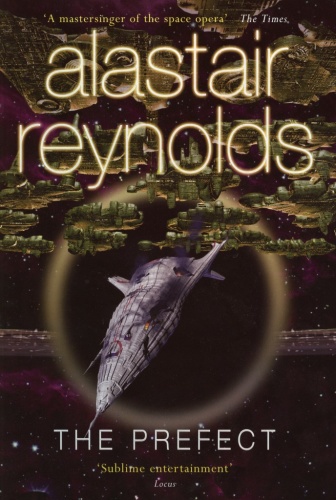 Description: From Publishers WeeklyThe seventh novel set in Reynolds’s Revelation Space milieu (most recently encountered in his 2007 collection Galactic North) is a fascinating hybrid of space opera, police procedural and character study. One of the 10,000 colony habitats of the utopian Glitter Band has been destroyed, and title character Tom Dreyfus, a cop who patrols the Glitter Band beat, is assigned to learn whodunit and why. Meanwhile, his protégé, Thalia Ng, shepherds a supposedly minor series of software upgrades on several other habitats, while Dreyfus’s superiors oust their leader, ostensibly for her own good. Reynolds unfolds revelations layer by onionskin layer, supplying enough detail to imply a novel’s worth of unwritten backstory without ever obscuring the stakes and personalities. The high-quality characterization more than compensates for the slightly too shadowy villains. This is solid British SF adventure, evoking echoes of le Carré and Sayers with a liberal dash of Doctor Who. (June) Copyright © Reed Business Information, a division of Reed Elsevier Inc. All rights reserved. FromReynolds returns to Revelation Space to follow the trials and tribulations of Tom Dreyfus, prefect of Panoply, tasked with maintaining democracy throughout the Glitter Band. Between an apparently minor security flaw in the voting software and an apparent attack that left an entire habitat destroyed and the only survivors flawed beta-level copies of three of its inhabitants, Dreyfus is caught in a web of good intentions gone bad. Tension is high as the threads leading to a conspiracy to control the Glitter Band and a plan to destroy people’s rights ostensibly to protect them come together faster than the planners intended. There are secrets in the highest ranks of Panoply; even Dreyfus has kept some from himself. The endgame is creative, though as usual with Reynolds, neither plot nor solution is simple. The questions he raises about freedom and the fascinating solutions his characters come up with are relevant to our own time, and the thriller aspects keep us engaged with the magnificently imagined world in which those questions are resolved. –Regina Schroeder